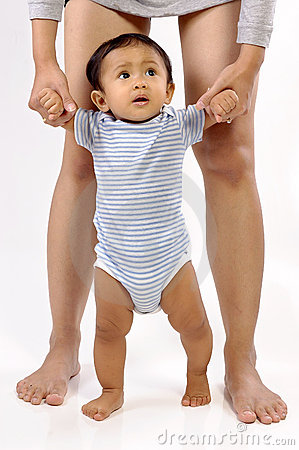 Sometimes we tend to experience a period of regression right before a period of big growth. I noticed this in my own life over the past several months. I was getting ready to get married, which was a huge deal for me. But as the wedding date neared, I found myself struggling with issues and insecurities that I hadn’t felt in a long time. I thought I had worked through these issues already, but here they were again.

It’s almost as if the toddler knows she’s getting ready for a big change. Her next area of growth is to start walking, and this is a good thing. Walking will open up a whole new world. It will literally change the toddler’s life. There’s a big part of the toddler that wants to step forward and engage this next step.

But walking is also really hard. So there’s the other side of the coin. There’s another part of the toddler that wants to hold back, and stay right where he is at. And so he wants to be carried and held.

If the toddler follows a normal course of growth and development, she eventually works through this ambivalence and starts to walk. But the period of regression is pretty common.

It was the same way with me. I knew the next step for me was to enter into a committed marriage relationship. There was a big part of me that was excited about this next step.

What should you do if you find yourself in a similar situation? First, normalize your experience. Don’t get mad at yourself because of the regression, but recognize it as a normal part of development. You don’t get mad at the toddler for wanting to be held, you recognize the behavior as normal and support the toddler where he is at.