How To Stop Wasting Time 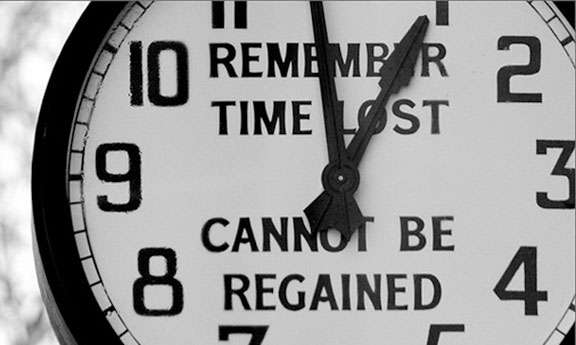 I was having lunch with some friends the other day, and we were all lamenting about how timewasters were taking over our lives. (I define a timewaster as something you spend a lot of time on, but it doesn’t directly contribute to any of your most important goals.) Some of my timewasters are email, Facebook and Instagram, and reading online blogs and articles. To a person, we each felt like we spent too much time on timewasters. We had other, more productive things that we wanted to spend our time doing. But for some reason, we couldn’t seem to stop ourselves from spending a lot of time each day on these timewasters.

For a while, the conversation centered around social media platforms like Facebook, Instagram, and Twitter. I wondered if it would be helpful to make rules for ourselves, like committing to checking Facebook only once per day. However, one of my friends said that even though he didn’t do Facebook and Instagram, other timewasters (like reading online articles) filled the space. I started to feel even more depressed. Maybe coming up with rules and guidelines for our social media use wasn’t the answer.

Then I started to think about my own life. There were a few times when I remembered feeling incredibly efficient and productive, and the timewasters fell by the wayside. One time was a couple years ago, when I had a major book deadline looming. I had two weeks until the deadline, and I had to rewrite several chapters and edit the entire book. I was worried that I wouldn’t be able to make the deadline, and everything else stopped. All I did was eat, sleep, exercise, and work on the book. I only checked email once per day. I didn’t waste time on Facebook and Instagram—because I couldn’t. I’ve never been more efficient and productive in my life.

After I finished the book and turned it in, I felt great. I thought that perhaps I could keep up these awesome habits I had gotten into during my crunch time. I thought about all the other things I could get done if I kept up this high level of efficiency. I thought perhaps I could even pick up a new hobby like playing the guitar or karate.

It didn’t last. I didn’t even make it one week before I was back to my old habits—checking email multiple times per day. Checking social media when there was an empty space in my day. Responding and reacting rather than being proactive.

I couldn’t keep it up. Maybe part of this regression was normal—you can only work dialed up to 10 for so long before you need to take a break. Still, I wondered—was I doomed to be inefficient unless I had a huge deadline looming? Was there a way to integrate this kind of discipline and efficiency into the fabric of my life and routine?

I’m starting to think that the only way to truly let the timewasters fall by the wayside is to have something so important and compelling in your life that everything else pales in comparison. For me, it was the book. It was so important that everything else took a backseat. Part of the problem, for many of us, is that we don’t have anything more exciting going on than living vicariously through other people’s lives on social media. No wonder we’re addicted to checking Facebook or Twitter. It distracts us from the struggle and meaninglessness that many of us would feel if we gave ourselves the space to just be.

All the rules or discipline in the world won’t do much to reduce timewasters if you don’t have something compelling to fill the space. I used to work with clients who were trying to quit drinking alcohol or using cocaine. When we talked about quitting drinking or using, we would also talk about what was compelling to them that could fill the space. If the person couldn’t identify something compelling to go after, relapse was almost inevitable. Using drugs was often a response to pain, depression, and meaninglessness.

Yeah, you probably check Facebook too much. But the more important (and difficult) question to face and answer is this: What is so compelling in your life that would fill the empty space if you stopped wasting so much time on Facebook? Go hard after that, and you will stop wasting time.