Are You Ready to Change? 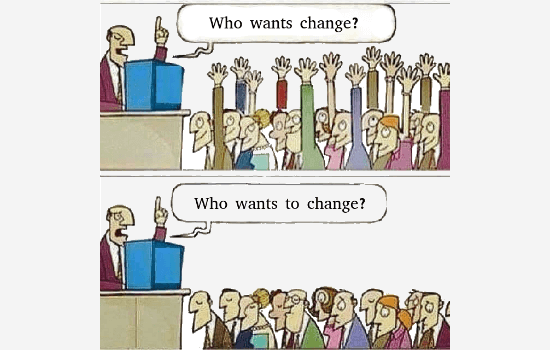 When someone is trying to make a change in their life, whether it is losing weight, quitting smoking, or something else, most people focus on techniques. For example, what is the most effective diet and exercise strategy? Should I try one of these new drugs that are supposed to reduce cravings to smoke? And so on.

Instead of trying to implement a program that the person isn’t ready for, you might intervene in a different way. Perhaps you might try something called consciousness raising, which tries to get the person to realize they have a problem. For example, maybe you share a story of a person who recently died of lung cancer, and show the data that connect cigarette smoking to health problems.

Once a person is motivated and has decided they want to make a change in their life, THEN you can move forward with strategy, techniques, and a plan. The person is ready for change, and the strategy matches the person’s stage of change. But don’t neglect the stages that come before.

What is one thing you are trying to change in your life? Take some time to honestly evaluate where you are at in terms of readiness for change. Are you convinced you have a problem and need to change? If not, you might be in the precontemplation stage. Or are you ambivalent about changing? If so, you might be in the contemplation stage. Try to match your strategy to your stage of change, and see what happens.